Dutch is famous for its hard-to-pronounce words, which may make you want to throw up your hands and schreeuwen – scream. But there are many reasons why Dutch doesn’t deserve this reputation – one being that Dutch is a phonetic language, which means it’s pronounced how it’s written.

So before you try and muddle your way through pronouncing tricky words, let’s go back to the building blocks of the language: the Dutch alphabet.

Is the Dutch alphabet the same as English?

The Dutch alphabet uses the 26 Latin letters, just like English. Most of the consonants follow the same pronunciation as English. There are a few exceptions:

Vowels are a little trickier, but worry not – we’ve prepared a vowel guide below to help you pronounce them with ease.

Try Busuu, the community-based app that actually teaches you how to speak a language.

See why 100% of beginners agree 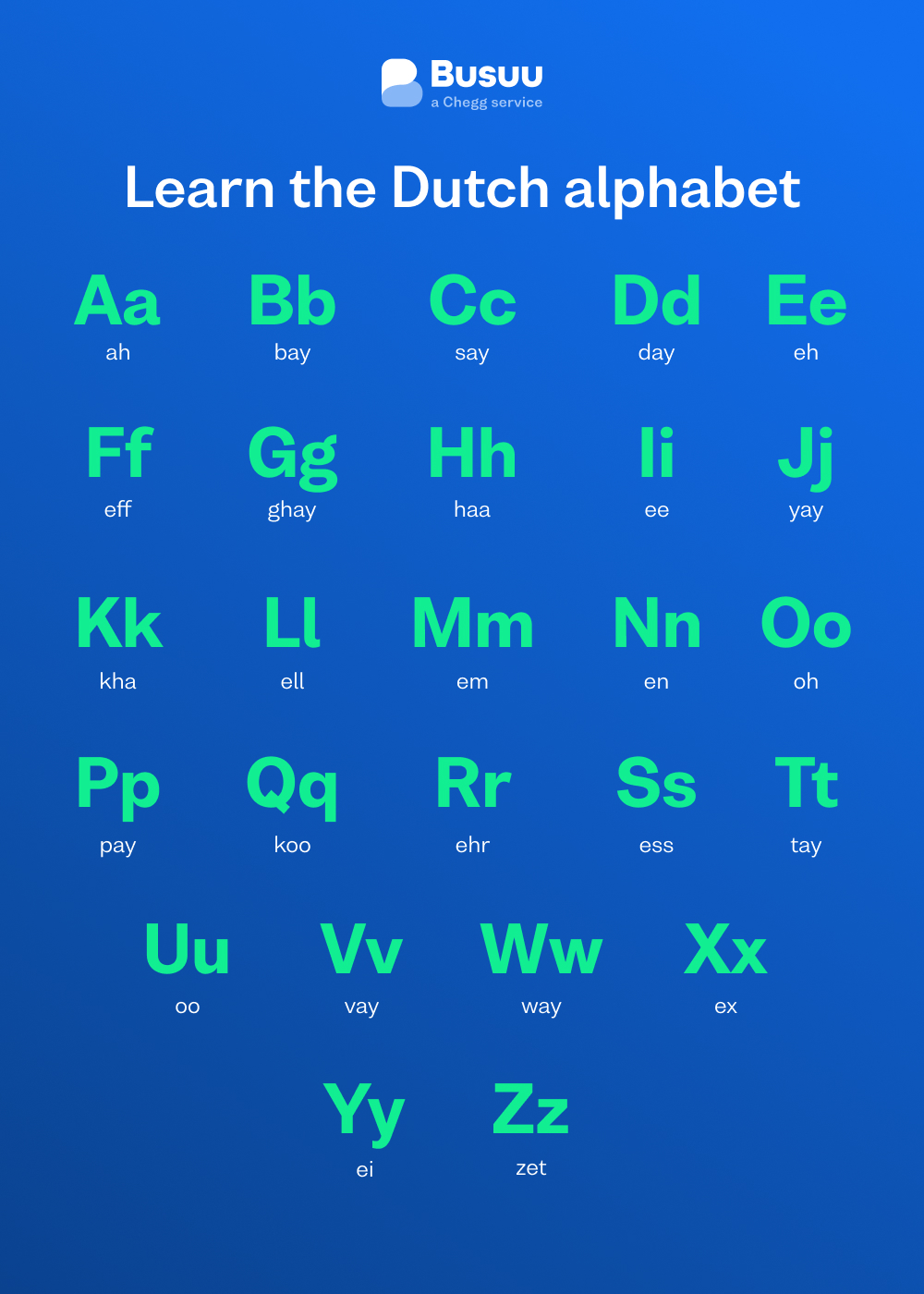 It’s important to master the difference in sounds since the words can take on different meanings. Here are a few examples:

In Dutch, there are three ways to make this common sound: first, with the letter y, second with the vowel combination ei, and third with the digraph ij. What’s a digraph? A digraph is two letters used together that make a unique sound – like “ph” in English.

IJ and ei make the same sound in Dutch. An example is brein (brain) or vijf (five). To pronounce this sound, start by saying the two individual sounds—“eh” and “ee”. Now, blend them together to make ij. You should still be able to hear each distinct sound in shortened form. You’ve got it!

How do you pronounce words in Dutch?

Using the sounds you’ve just learned, can you figure out how to say these common Dutch words?

Heerlijk (delicious) Remember your long vowels and the ij sound? Put it all together to say “hair-leik”

Spreek (speak) This is pronounced “spraik,” as in Ik spreek Engels.

Jaar (year) Remember that the Dutch j sounds like y? You would say this word “yahr” – very close to its English equivalent. In fact, you'll notice many Dutch words are more familiar to English speakers in spoken form than in writing.

You’re on your way to speaking Dutch with confidence

And there you have it. With a few exceptions, the Dutch alphabet looks and sounds remarkably similar to the English alphabet.

But don’t stop your learning journey here. Progress further with Busuu – the app that helps you speak with confidence after 8 weeks.

See why 100% of beginners agree