If you’re curious about learning Arabic, the Arabic alphabet is a great place to start. And you’ve come to the right place to learn all about it!

Learning a whole new alphabet can be daunting for beginners. But with this guide, it’ll be as easy as alif, baa, taa—that’s A, B, T, the first three letters of the Arabic alphabet!

First off, what’s it like to learn the Arabic alphabet as a beginner?

Reading and writing in Arabic with the Arabic alphabet isn’t as hard as it looks. It can be intimidating for English speakers because of the unfamiliar Arabic characters.

Ultimately, learning to read in Arabic just means you need to ‘un-learn’ a few habits that are second nature to English speakers.

Bonus: it may surprise you to learn the Arabic characters make up the written alphabet for a bunch of different languages, including Persian, Malayalam, Urdu, Central Kurdish, Pashto, and Uyghur. So by learning the Arabic alphabet, you’ll build a reading base for other languages, as well!

How many letters are there in the Arabic alphabet?

All 28 letters are consonants, and most letters have four different forms. Vowels do exist in Arabic – but we’ll explain all about Arabic letter forms and vowels a bit later on!

Why might Arabic letters sound weird to English native speakers?

Some Arabic letters don’t have a direct equivalent sound in English, which can be challenging for English speakers. One example is ض (Dhad), a widely used letter in Arabic that doesn’t exist in other languages. Thanks to this popular letter, Arabic is sometimes nicknamed “the language of Dhad”.

But don’t let this put you off! With instruction and practice, you can learn to pronounce Arabic well enough to communicate and be understood. 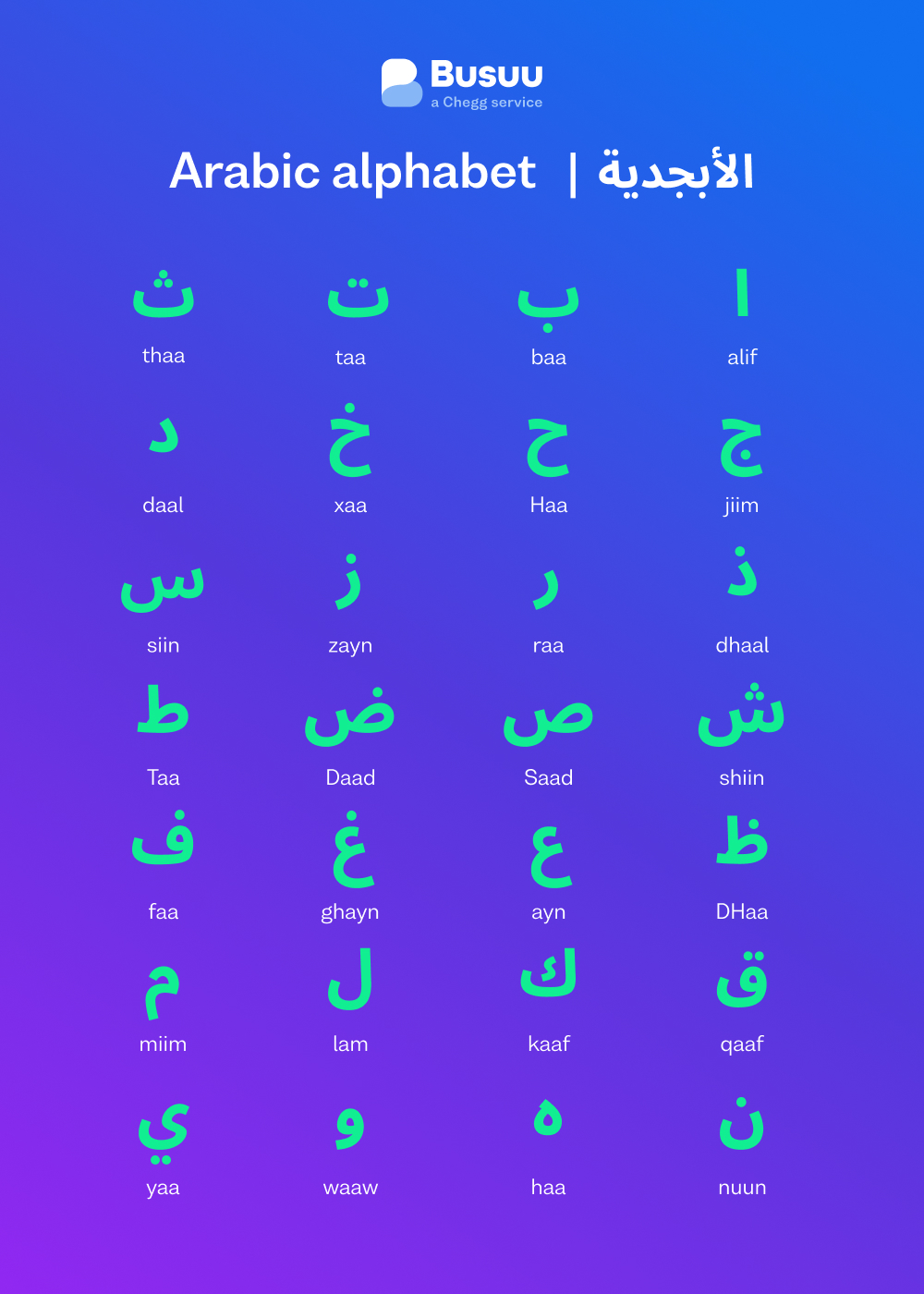 Overwhelmed? Busuu have got your back

At Busuu, we use images to help you remember the shapes of the Arabic characters, and what sound they correspond to. 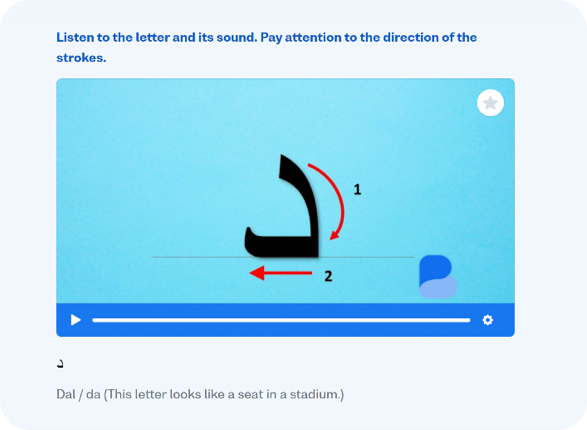 Following so far? We’re impressed. Let’s dive into the detail.

Arabic alphabet in detail: 4 important concepts to be aware of

In the chart above, you’ll see that we’ve listed four different ‘forms’ for each letter. This is because, with a couple of exceptions, most letters have four different forms, depending on how and where they appear:

When you look at Arabic text, you may notice that the Arabic letters in words can ‘flow’ together (think of it as joined up handwriting, otherwise known as cursive!).

The individual Arabic letters in the word are ك ت ا ب – but together, they look quite different.

Some letters welcome this flow, while others don’t. Unfriendly letters (the clue’s in the name!) are the ones that don’t.

The 6 unfriendly letters in Arabic

While most letters are happy to sit next to the letter that follows it, a select six are more ‘anti-social’.

Here are the six Arabic letters that don’t join up with the letter following them. Instead, they form a break in the middle of a word.

The first and last character are the baa ( ب ) character, and the middle is the unfriendly alif ( أ ).

The first baa flows straight into the alif, but the unfriendly alif causes a clean break. The next baab is written the same as an isolated letter.

Can you guess why we call these the smiley letters? Look closely, and you’ll see they almost look like smiley emojis :).

Unlike the unfriendly letters, the smiley letters don’t disrupt the ‘flow’ – these letters follow the same rules as most of the other letters. The only thing that changes is the placement of the dots, from over or under the “smiley mouth” to over or under the vertical line.

Let’s take a look at the word بيت (house), pronounced byat, as an example.

You’ll first see baa joined to yaa –and here, you’ll note that yaa’s two dots move from under the curve to under the line.

Lastly, it’s joined to taa, which finishes the word with a full curve as the end letter.

Arabic uses a system called Abjad, where each letter stands for a consonant (i.e., there are no vowel letters).

While Arabic doesn’t officially have vowel letters, it does have ways of making long and short vowel sounds.

The three letters that function as long vowel sounds in words are:

About the 3 ‘unwritten’ short vowel sounds

But here’s where it gets hairy. Short vowel sounds were once written with accents (otherwise known as diacretics) above or below their neighbouring letters (the consonants). But over time, modern Arabic has dropped these accent marks. Nowadays, you’ll only see them in texts written in Classical Arabic, like the Qu’uran or in literature.

So how do you know how to pronounce a word in Arabic without vowels? Context and experience. All good things that come with time.

You’re on your way to learning Arabic

And there you have it. While it may not be quite as easy as learning a single set of Arabic letters, you’ve now absorbed tons of information about how to start reading and writing in Arabic.

Next, why not join Busuu – the award-winning language-learning app? Sign up for free today to access Busuu’s online Arabic course, complete with lessons covering the Arabic alphabet.