This article will help you remember the months of the year in English quickly.

A year consists of approximately 365 days, and the year is divided into 12 months. The table below shows the names of the 12 months along with their short form abbreviations.

What are the months of the year in English?

We're Busuu: the app that actually teaches you how to speak a language. 100% of beginners agree.

Ready to learn English with confidence? 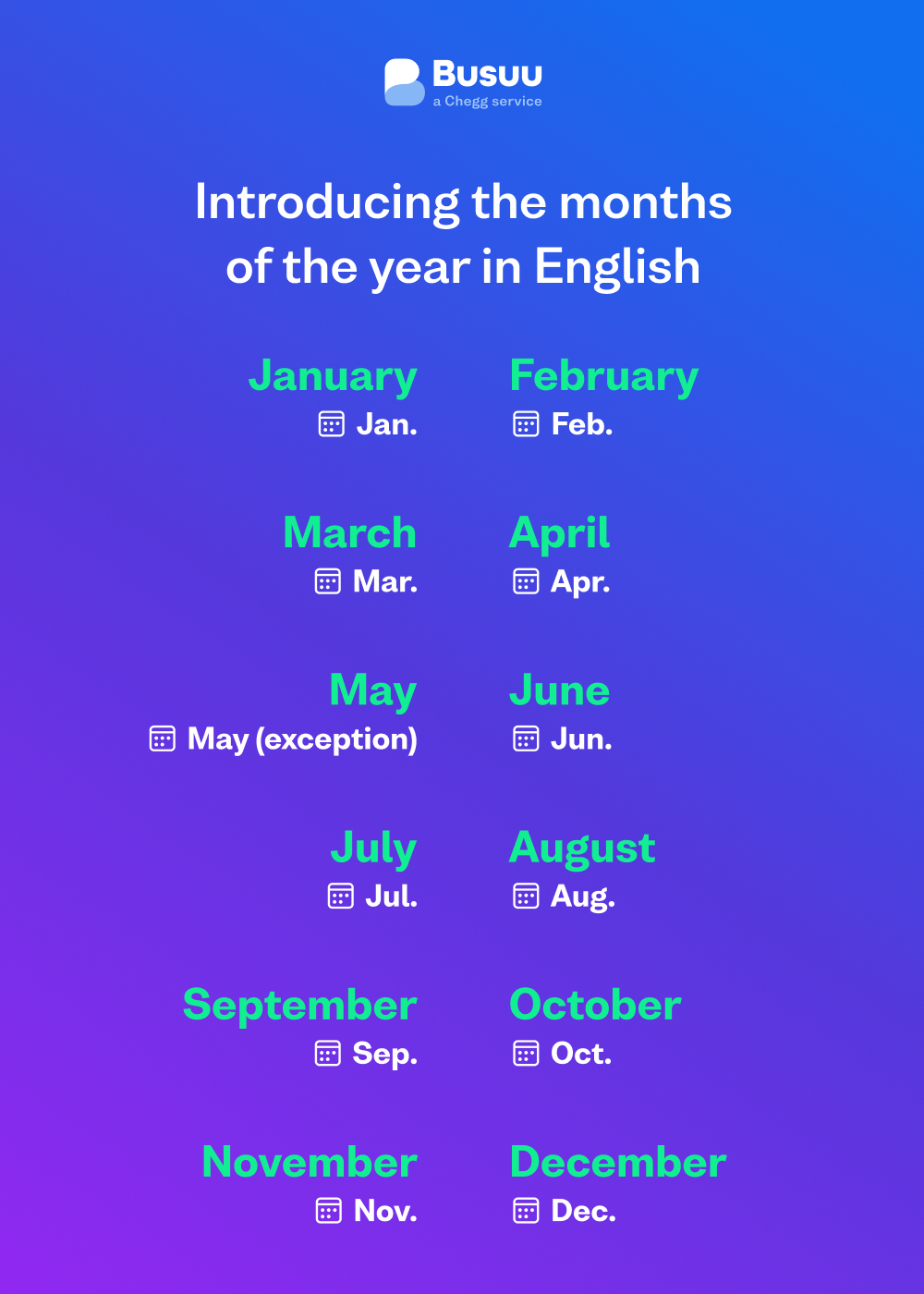 What is the meaning of a leap year in English?

February is the shortest month with either 28 or 29 days, but what do we mean by a leap year?

The years that can be divided by four are called leap years. For example, the years 2024 and 2028 are leap years. In a leap year, the month of February will have an extra day, i.e., the month will have 29 days. This usually happens once every four years.

Now that we know about the 12 months of the year and understand the concept of a leap year, let’s try to memorize these 12 months with easy tricks.

Easy ways to remember the months of the year in English

The first tip to learn the months of the year is to divide these 12 months into a group of three months each and memorize the first letter of each month.

This trick will help you to memorize the months in chronological order quickly.

You can also learn the months of the year in English easily with the help of seasons:

How did the months of the year get their names?

Knowing the story behind a particular month will help us remember it better. So, let’s see how these months got their names.

The month of January is named after Janus - the Roman God of beginnings, gates and doors.

The second month of the year, February, is named after an ancient Roman festival of purification called Februa.

If we talk about March, then this month is named after Mars, the Roman god of war.

Here’s a fun fact: The Roman calendar originally began in March, and the months of January and February were added later.

April takes its name from the Latin word aperire, meaning ‘to open.’

May is named after the Greek goddess Maia.

June is named after the Roman goddess Juno, who is believed to be the god of marriage and childbirth, and the wife of Jupiter, king of the gods.

July and August were named after two major figures of the ancient Roman world. July is the first month in the calendar that bears the name of a real person, rather than a deity. It is named after the statesman, Julius Caesar.

The month of August is named after Rome’s first emperor, Augustus.

The last four months of the year September, October, November, and December are named after Roman numbers 7, 8, 9, and 10. They were originally the seventh, eighth, ninth, and tenth months of the Roman year.

How can we use English months when writing dates?

Now, let's talk about how to write dates using the months in English.

Asking questions about months in English

Here are a few examples of questions including months of the year, to give you an idea of how to structure them:

But there are more than months to learn

Continue learning English with Busuu’s online courses to take your language skills to the next level with the help of our active community of native speakers.