Learning about time is an essential skill that you’ll encounter while learning any language.

When it comes to beginning to learn time in the English language, it can seem a little overwhelming as it’s more than reading the numbers on the clock.

There are many common terms and phrases associated with time in English. Whether it’s about booking flights or making a reservation at your favorite restaurant, this article will tell you everything you need to know about time. First, let’s look at the 24-hour and 12-hour format systems.

How do the 24-hour and 12-hour time formats work in English?

We are all aware that in any part of the world, there are only 12 hours mentioned on the analog clock. In a 12-hour format system, a number comes twice, meaning that the clock strikes twice in a 12-hour period: once in the early morning and once in the evening. This means that the 24 hours of the day are divided into two halves (midnight and noon). We will talk in detail about this soon, but let’s first learn about the 12-hour time format and the meaning of AM and PM.

What is the difference between AM and PM with reference to time in English?

When telling time, generally ante meridiem (am) and post meridiem (pm) are used to differentiate between morning and evening. In this case, to show 5 in the morning (5 am) or 5 in the evening (5 pm). 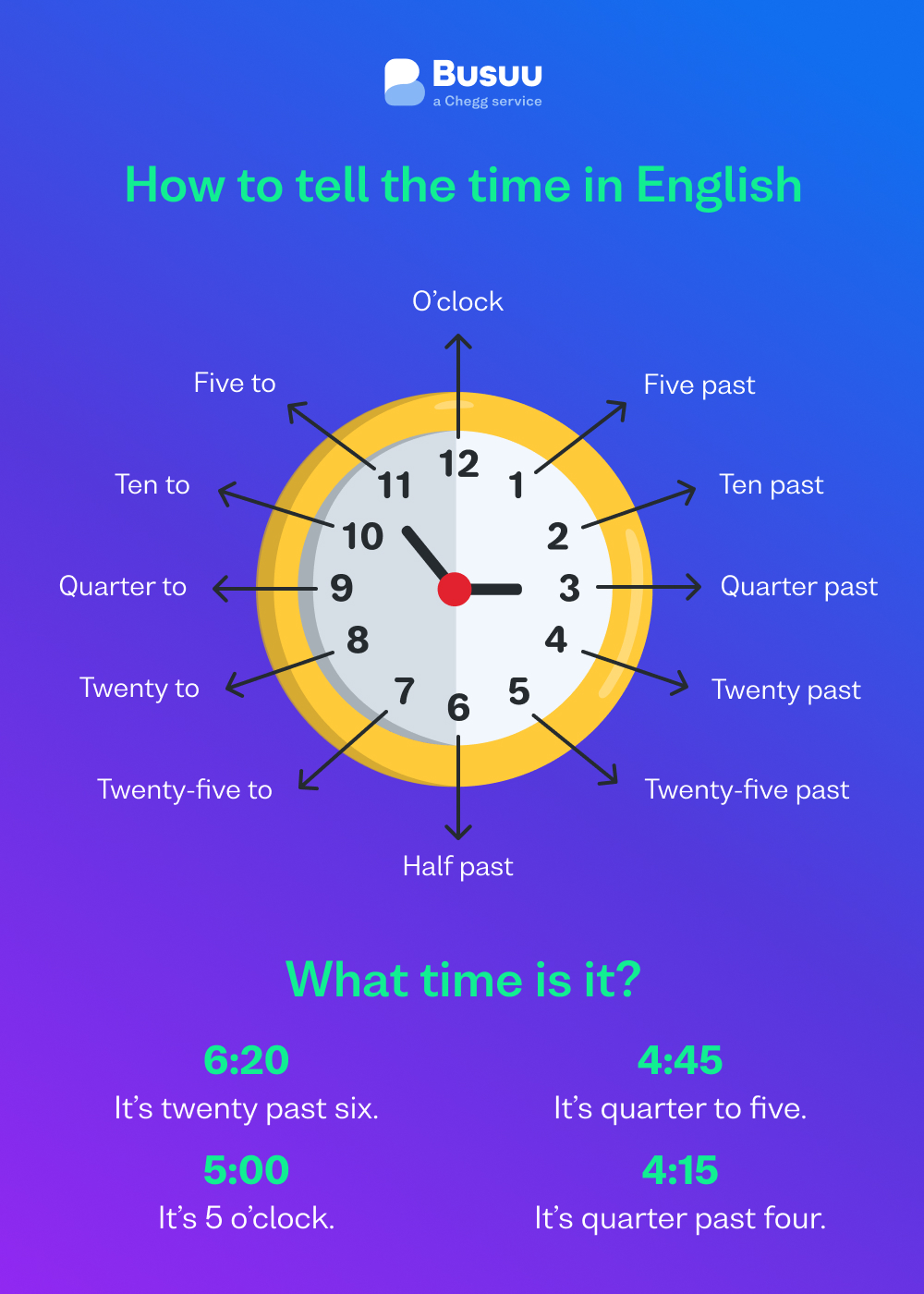 Learning to tell the time is one of the basic skills that you need to learn while learning English.

Become a pro in English with Busuu. Our award-winning online course teaches you the simple, everyday language you’ll actually use.

Different times of day in English

The numbers give us the specific time, but it's also normal to refer to the general time of day rather than being specific. Here are a few expressions that are frequently used in relation to time.

Morning: Anytime between 12 am and 12 pm is considered "morning," marking the beginning of the day.

Noon: When someone uses the term "noon," they are referring to 12 pm, which is the beginning of the afternoon.

Afternoon: Literally meaning "after noon," the word "afternoon" refers to any time between 12 pm to 5 pm

Evening: The time the evening starts and ends varies between cultures and location, but often refers to any time between 5 pm and 9 pm.

Night: Again, the time night starts and ends varies, but typically refers to any time between 9 pm and 6 am.

Midnight: As its name indicates, "midnight" means 12 am.

When referring to time on the hour, the word "o'clock," which means "of the clock," is used. It works for both am and pm on every hour of the clock, but not for minutes.

When we talk about the exact time, there are two ways in which we can say it:

A. Say the hour first, followed by the minutes:

B. Say the hour first, then the minutes:

D. Say “half past.” When someone says it is "half past," they indicate that it is half past the hour. For example, 30 minutes past 6 o’clock would be “half past six.”

Now that we have understood almost everything that we need to know about time in English, Let’s take a look at examples of different phrases and idioms with reference to time used in sentences.

How to initiate conversations with someone in reference to time in English?

Could you please tell me the time?

If you ask this question, you will usually get an answer in 12-hour time format or someone might show you their watch so you can read the time.

When does the movie start?

This can be a great conversation starter. If someone asks you the time, you can answer according to the clock time that you learned in this article.

When does the bus arrive?

If the arrival time were to be exactly at a particular hour, then the answer would be in the “o’clock” format.

Go beyond the time with Busuu’s online English course

Now you know how to tell the time in English, it’s time to further your knowledge.

Busuu can take you from English basics through to fluency. The course even includes a whole set of lessons on English pronunciation. So what are you waiting for?

Days of the week in English
Learn the Months of the Year in English
Numbers in English
Colors in English
English pronunciation
How to speak English
Is English hard to learn?