Can you count in English? Learning to pronounce and write numbers in a new language is important for communicating information like a phone number or everyday activities, like ordering at a restaurant. In this quick guide, we’ll learn how to write, spell, and pronounce the English numbers one through to one hundred (1-100).

English numbers come from its two root languages, French and German. If you’re a native speaker of a Germanic or Romance language, many of these will sound familiar. If you’re not, we’ll still have you up to speed in no time.

Below, we’ve shared the numbers 1-100. We’ve broken them down into sets of 10 so you can familiarise yourself with them in small quantities. We have given you the numeral (or figure), the English spelling, and the pronunciation for all one hundred numbers. 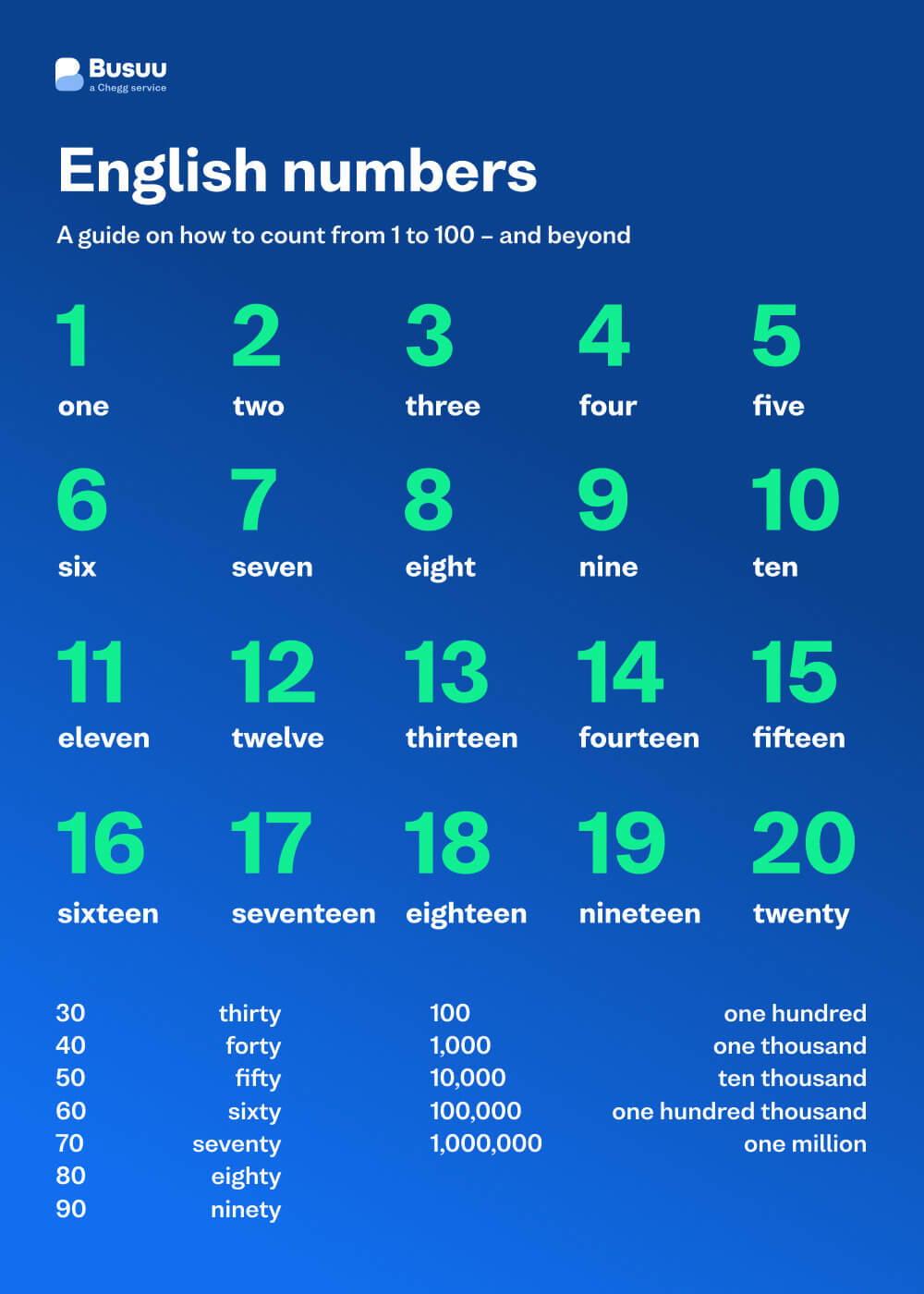 Okay, we snuck in a bonus number. The number zero (0) comes before one and represents no quantity, neither negative nor positive. Zero is sometimes also called “nought” or “nil” in British English.

The English number 10 is spelled ‘ten’.

The suffix ‘-teen’ comes from the English word ten and at its root means plus 10. That means you can break down a number like fourteen (four-teen) to find the quantity (4 + 10).

Fun fact: the English word ‘teenager’ quite literally means a person whose age ends with ‘-teen’.

Just like the numbers 1-10, these numbers are all one word, with no hyphens (-). The English number 20 is spelled ‘twenty’.

Cheers, you’re halfway to 100! Once you get into numbers above twenty, you can follow a reliable pattern. Each of these number words starts with the tens number (twenty, thirty, etc.) connected with a hyphen to a ones number.

While you have ‘four’ and ‘fourth’ in English, the ‘forty’ spelling catches a lot of people out. Many mistakenly think it’s spelled ‘fourty’, but the numbers spelling lost the ‘u’, shortening over time.

One hundred is spelled with a space and no hyphens and is also simply called “a hundred”.

Ready to jump from memorising numbers and words to speaking in conversation?

Counting to higher numbers? These number spellings will help you understand how to read, write and pronounce common numbers up to one million.

You just learned the cardinal numbers – meaning numbers valued by quantity. Next, we’ll learn the ordinal numbers, which are valued by order – ‘first’, ‘second’ etc.

This is useful for describing items or telling a story in sequence.

‘First, we left the house. Second, we drove to the supermarket…’

Here are the cardinal numbers with their full names and numeral abbreviations:

While the first three numbers are irregular, starting with ‘fourth’ you can follow the regular pattern of all words ending with ‘-th’, making it easy to guess the ending for numbers not ending in one, two or three.

When should you spell out a number in English?

In general, numbers are only spelled out when they are written in small quantities (one to nine) in a text or when they start a sentence. But of course, there can be exceptions.

Differences in how to write English numbers

While spelled the same across all English-speaking countries, there are some differences in the ways that English numerals are written.

Zero is sometimes written with a slash through it to differentiate between 0 and the letter ‘O’. The slash is more common in Europe and British English.

The vertical line and the angled line are sometimes connected at the top and are sometimes left open. Either version is accepted and recognized.

Seven is sometimes written with a slash through the middle to avoid confusion with the simple ‘1’ without a base. This for is more common in British English.

You’ve made it to the end! To practice your numbers, count or say common numbers in your life, like your age, your number of kids, your address, or your phone number.

There’s an expression in English to describe something easy as being ‘as easy as 1, 2, 3!’. We hope that you feel confident and empowered after this lesson.

Try learning in the fast lane