From making a reservation to scheduling a job interview, knowing the Japanese days of the week can definitely come in handy for those learning Japanese.

Just like in English, you learn the same days in Japan, Monday to Sunday.

And, just like all of our days end in -day, the name of each day ends in -youbi or -yōbi, depending on your romaji preferences (hiragana: ようび , kanji: 曜日).

-youbi, of course, simply means day (of the week). It’s pronounced like “yoh” as in yo-yo and “bee” as in a bumble bee, with emphasis on the “yoh”. That means what varies in the names of the days of the week is what comes first.

Fortunately, when it comes to the Japanese days of the week, the first part of each day’s name has an easy to remember meaning and corresponding kanji.

As you may have noticed, when you’re new to learning Japanese, tackling everything at once can be overwhelming. That’s why we’re going to break this lesson on Japanese days of the week down into pieces to help you not just learn the names of the days but remember them.

To get started, let’s just take a look at the names of the days of the week to help you get acquainted.

Learn to say the Japanese days of the week 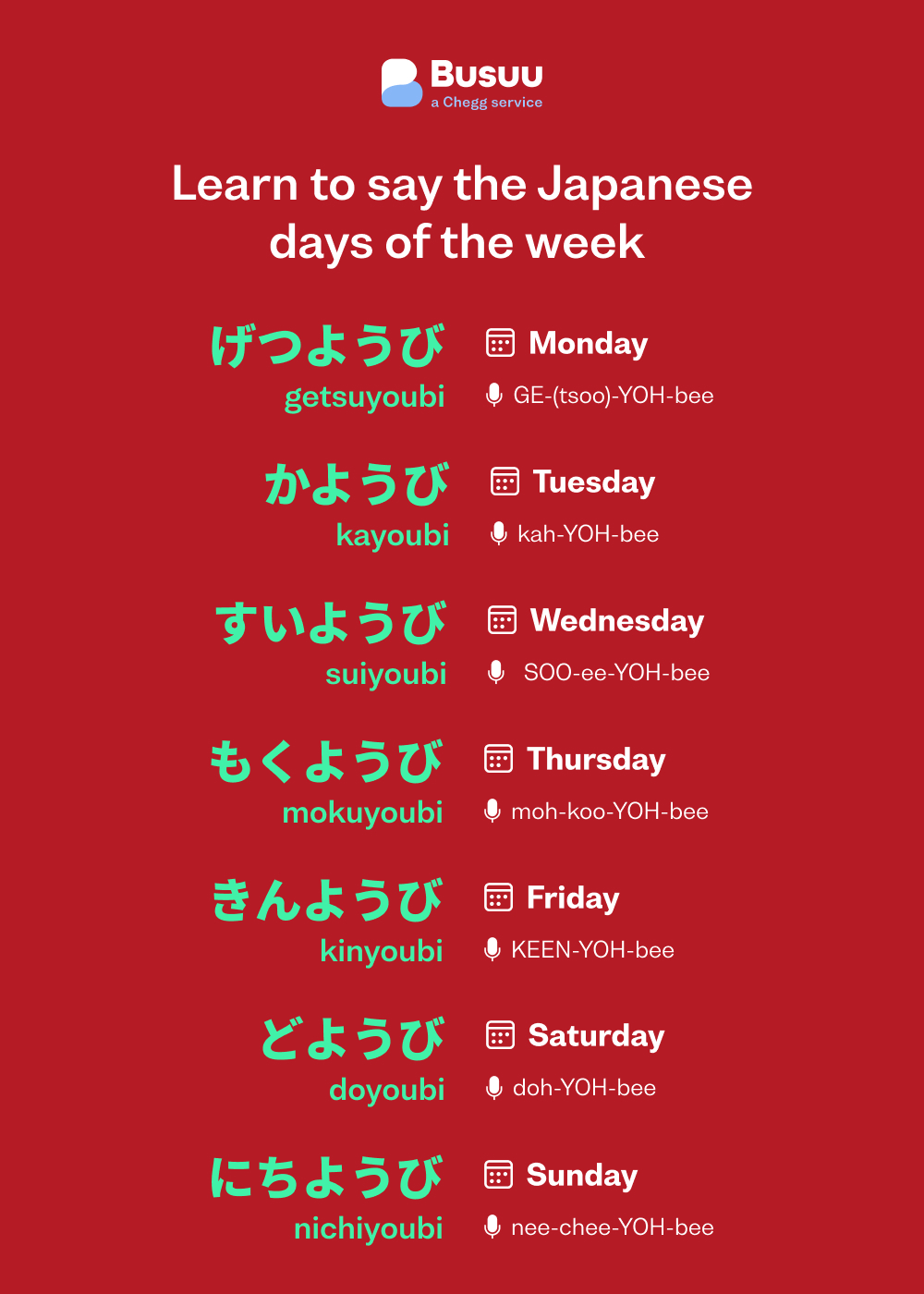 Pro tip: Struggling with pronouncing the days of the week in Japanese? We recommend taking the time to learn hiragana before you get too much further with your studies. It's the best way to learn how to pronounce Japanese words!

A mnemonic is any word-based or visual device that helps you remember something. It’s how you’ll learn in the next section – and how you learn Japanese with Busuu. 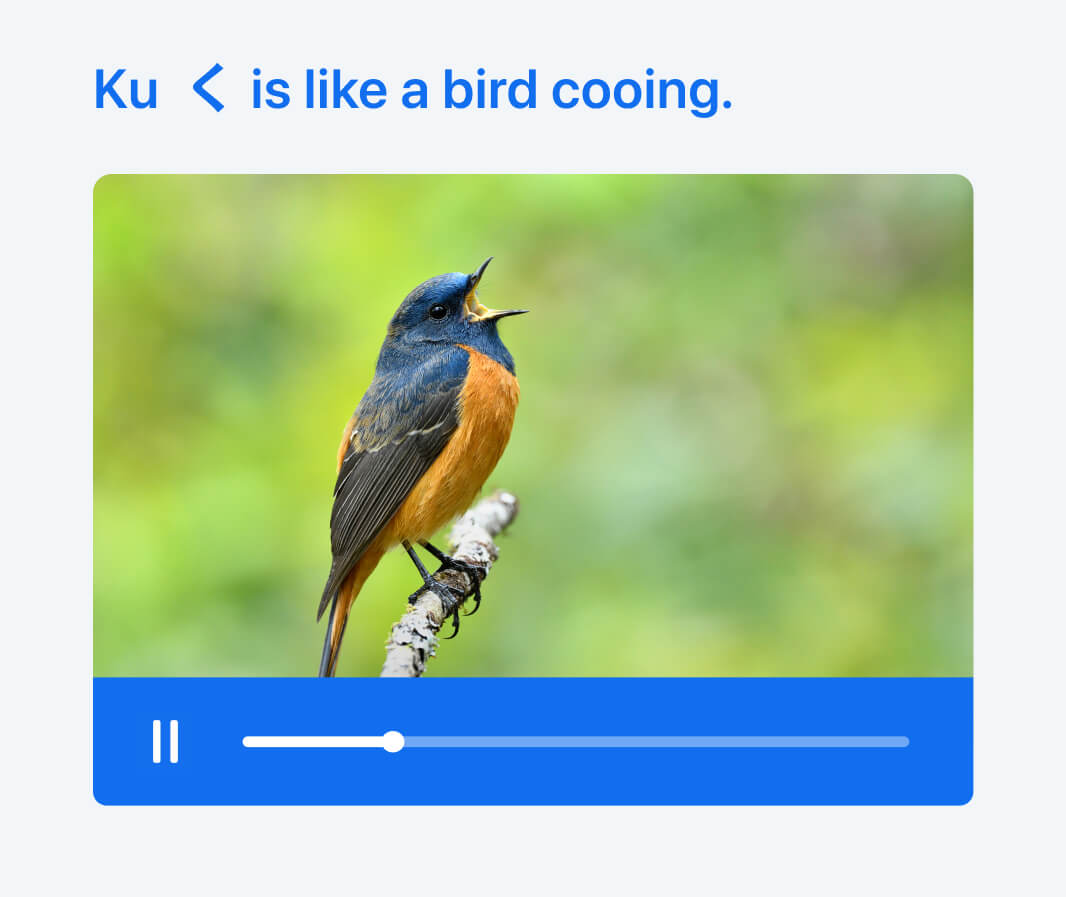 Learn to read the Japanese days of the week

Alright, those are the names at a glance.

Now, let’s take a look at the individual days of the week kanji and what they mean. Helpfully enough, most of the kanji used on the days of the week are among the first kanji you’ll learn, so this can either serve as a helpful refresher or your first dip of a toe in the deep waters of learning kanji.

Monday’s kanji is 月, getsu (also read tsuki, but we won’t dig too far into onyomi and kunyomi right now). 月 means month or moon. That means Monday, in Japanese as in so many other languages (including English!), comes from “moon day”. How neat is that?

Tuesday’s kanji is 火, read here as ka (the onyomi). This kanji means fire – so you can imagine that you don’t want to get fired on Tuesday.

For Wednesday, the kanji is 水, here pronounced sui (but often mizu on its own). 水 means water, so maybe you can spend it hanging around the water cooler drinking sweet, sui-eet water.

木 is the Japanese kanji for wood, pronounced moku, “moh-koo”. To remember it, you could think of a mockingbird in a tree, or a tree getting made fun of for trying out a new hat that, frankly, doesn’t work.

金, or kin, is Japanese for gold. Easy enough to remember since Friday is just about always golden, right? People are keen for Fridays (see what we did there?). After all, they didn’t name a restaurant chain TGI Wednesday’s.

Pronounced “doh” (like a certain all-yellow television patriarch), doyoubi uses the kanji 土, do, which means soil. You could think that on Saturdays, we plant seeds in the soil for the coming weeks, or maybe feed our sourdough starter.

Last, but certainly not least, we have Sunday, or nichiyoubi. You might notice that the kanji for nichi is the same as the one for bi, 日. 日 can mean sun or day, so Sunday in Japanese is literally, well, sun day. It’s so easy to remember it’s like you ni-early chi-eated. Nichi.

And those are the Japanese days of the week

Now you know everything you need to know (and more) about Japanese days of the week. With all this new knowledge, you’re ready to go out and book a table at a sushi restaurant, schedule a time to talk to your sensei, or anything else that requires intimate knowledge of how to say ‘Monday’.

Pop quiz: what day is it today?

Busuu’s online Japanese course is the place to learn essential, everyday language like this – with help from native Japanese speakers, to boot.

Don’t wait until another _–youb_i. Take your Japanese to the next level with Busuu.