Japanese honorifics are complicated – and important. If you’re wondering, what do chan, kun, san, and sama mean? Well, you’ve come to the right place. In this guide to the most common Japanese honorifics added to names, you’ll learn Japanese suffix meanings so you know which one to use and when.

According to Busuu’s resident Japanese expert, “Japanese honorifics are all about politeness. They’re a little tricky, but they’re very important. See, politeness is of the utmost importance in Japanese culture, and that importance is reflected in the language system.”

It appears across several parts of speech in Japanese, including in verb variations and common phrases.

However, one common and important way honorific speech is applied is in the prefixes and suffixes we use to refer to other people indirectly and to address them directly. These additions are referred to, simply, as honorifics.

Using these honorific names correctly can make even basic Japanese feel more natural and correct to the situation – while getting these wrong can result in an awkward moment.

Admittedly, this subject can get a bit difficult as you get into more advanced Japanese, but the basics are easy enough to learn.

Top tip: When in doubt, go with addressing and referring to people using their last name plus the polite ending -san (i.e. Smith-san, Suzuki-san) until otherwise instructed.

Honorifics are essentially nicknames that get applied across society. They’re usually suffixes and typically added to the end of someone’s last name.

The primary factors that determine which honorific you should use are:

This is not an unfamiliar concept, if you think about it. We often speak to our friends differently than we speak to our boss or grandmother – the Japanese language just formalises those adjustments through grammar and honorific speech.

So, with that in mind, let’s take a look at the most common Japanese honorifics you’ll hear and use as you learn Japanese. 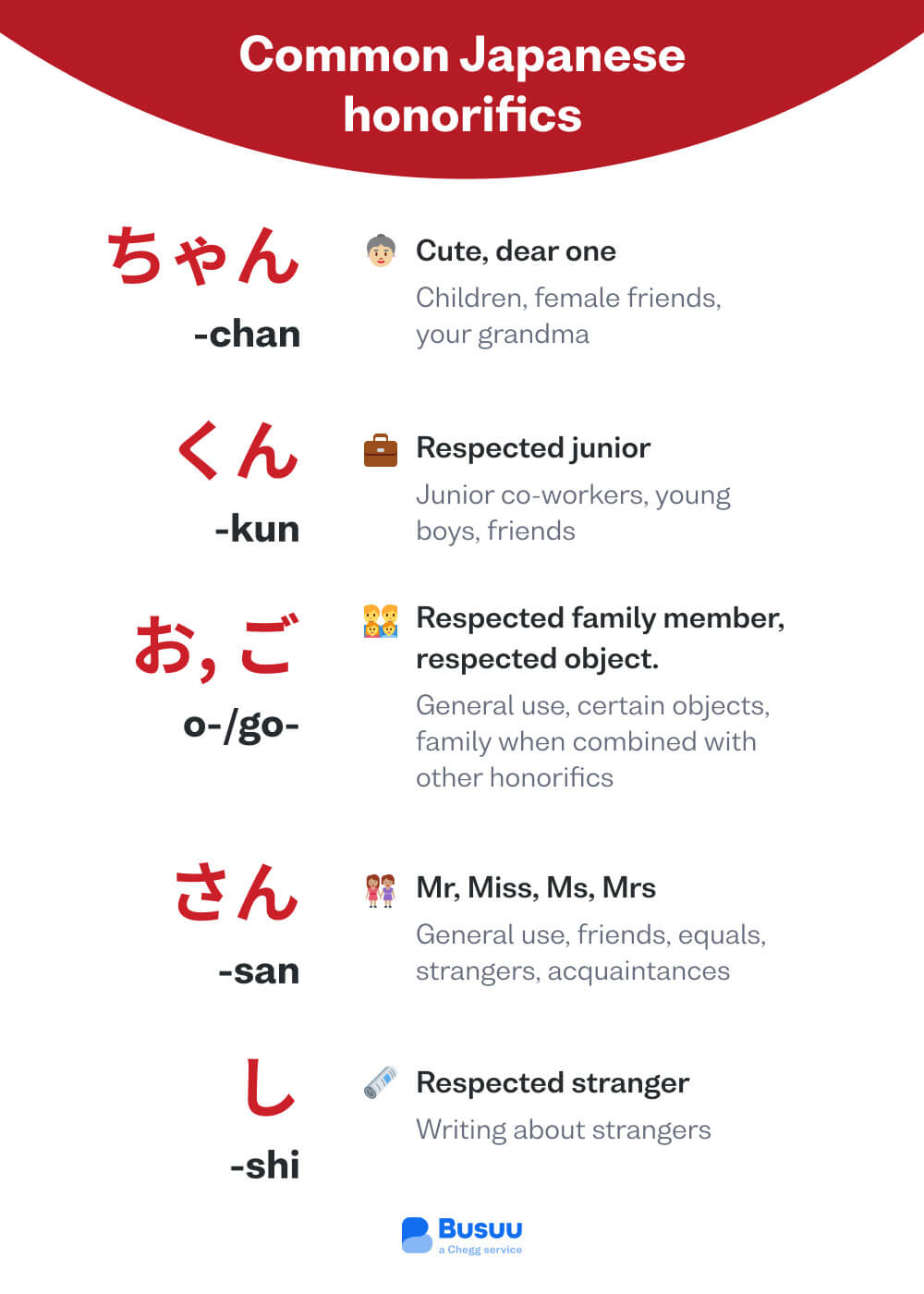 The Japanese suffix -san is polite, but not excessively formal.

It can be broadly used to:

It’s gender neutral and works functionally like Mr./Ms/Miss/Mrs., but is much more commonly used in modern language than those examples.

-San also gets added onto the names of some companies and professions to refer to the shop or the people who work there.

A butcher’s shop is called a nikuya.

The butcher themselves is nikuya-san.

-Sama is another common – though less common – polite, formal suffix. It’s used to show great respect to individuals who are older or higher ranking than you.

For an approximate English translation, it would be more like Sir or Madam than Mr. or Ms. – or similar to how we use, “Ladies and gentlemen”.

Notably, -sama also appears in the polite phrase said at the end of a meal in Japan, gochisosama(deshita), the flip side of itadakimasu – both of which use honorifics to convey respect and humbleness.

Fun fact: When the current emperor's sister married a commoner, she technically became a commoner. After the wedding, Japanese news reporters switched how they referred to her from -sama to -san. (Our resident Japanese experts thought that was kind of mean.)

The Japanese honorific -kun is common among friends and younger people.

People who watch Japanese television or read manga often take notice of -kun and -chan as they appear frequently as nicknames among friends in Japanese pop culture.

-Kun is the more respectful of the two, but is still rather informal. It’s used more commonly for men and boys than women and girls.

-Chan, as mentioned above, is a similarly informal, familiar suffix used for people you’re close with. The more feminine nickname, it has a cutesy and childlike connotation. It takes its roots from children mispronouncing -san, but has found its way into regular use.

It is not appropriate in a work environment, but can be a nice, cute nickname for friends or romantic partners. It’s typically used for young women you’re close with, children, babies and animals, and can even be used for beloved older relatives, like a grandmother.

Next, we have -shi. This is one you’ll likely use less, but may hear in use, especially on the news or radio.

The suffix -shi is used when politely referring to strangers, and is fairly formal. In news pieces, shi can also be used on its own once the person has been introduced, as long as there’s no one else it could be referring to.

Finally, the Japanese prefixes o- and go- are common additions when referring to certain objects and nouns in polite speech.

A great example of this is お茶, ocha – cha is the word for green tea, but it is almost exclusively referred to as ocha in day-to-day Japanese. You also see it commonly used in family honorifics. For example, the word you’d use to casually address your older brother is niisan, but when being more polite or formal, it becomes o-niisan.

When you learn Japanese with Busuu, you start with polite speech to make sure you can begin speaking Japanese without risking a cultural faux pas.

When should I use honorifics?

Most of the time! You can use the handy chart above to figure out which honorifics are appropriate for the situation. In fact, it’s generally considered rude to refer to someone by just their family name without an honorific in Japan, with few exceptions, even when you become more familiar. (The primary exception is athletes on the same team, if you happen to be a famous basketball player.) The act of calling someone by just their family name is called 呼び捨て (yobisute), from yobu (to call) and suteru (to throw or abandon).

Given names are generally reserved for the inner circle, but your closest friends may have you address them by their first name without an honorific.

When not to use Japanese honorific names

This is the bigger question. There are four specific cases when you should not use honorifics:

Now you know the basics of Japanese honorific names

But there’s a lot more to discover if you want to learn Japanese.

As mentioned at the start of this piece, honorific speech doesn’t end at names.

As you get further into Japanese, you’ll find that ‘honorific speech’ refers to a wide network of vocabulary. There are unique verb variations to show humbleness and different levels of respect used in everyday speech in Japan.

How useful is honorific speech, really?

Well, while this concept may seem unfamiliar and ergo unlikely to be useful, it’s actually incredibly common to see these words in use in daily life in Japan. There are tons of common Japanese words and expressions that come from these more polite forms.

And there you have it! That’s Japanese honorifics explained. Now you know a bit about san, chan, kun and how to use them. But learning doesn’t stop here.

Polite speech is used widely in day-to-day Japanese, and it’s important that you take the time to master it as you learn Japanese.

You can do it, but you’ll need a good guide. Why not let Busuu light the way?

We politely suggest you get started for free on Busuu today.

Greetings in Japanese
Learn about Japanese Kanji
17 Ways to Say Thank You in Japanese
Learning Hiragana: why the best way is with mnemonics
Should you learn romaji? What it is and why you don't need it
Time in Japanese
Japanese pronunciation
Japanese alphabet