Ready to buckle down and learn Japanese particles? We’re thrilled!

While grammar may not make everyone’s heart skip a beat, it’s incredibly important for communication. If you’re learning Japanese, familiarising yourself with these connector words is essential to getting across your meaning. Fortunately, we have your Japanese particles guide at the ready. We’ll teach you the meaning of ga in Japanese, and words like the ni particle in Japanese.

First, you might be wondering, what are Japanese particles, exactly? 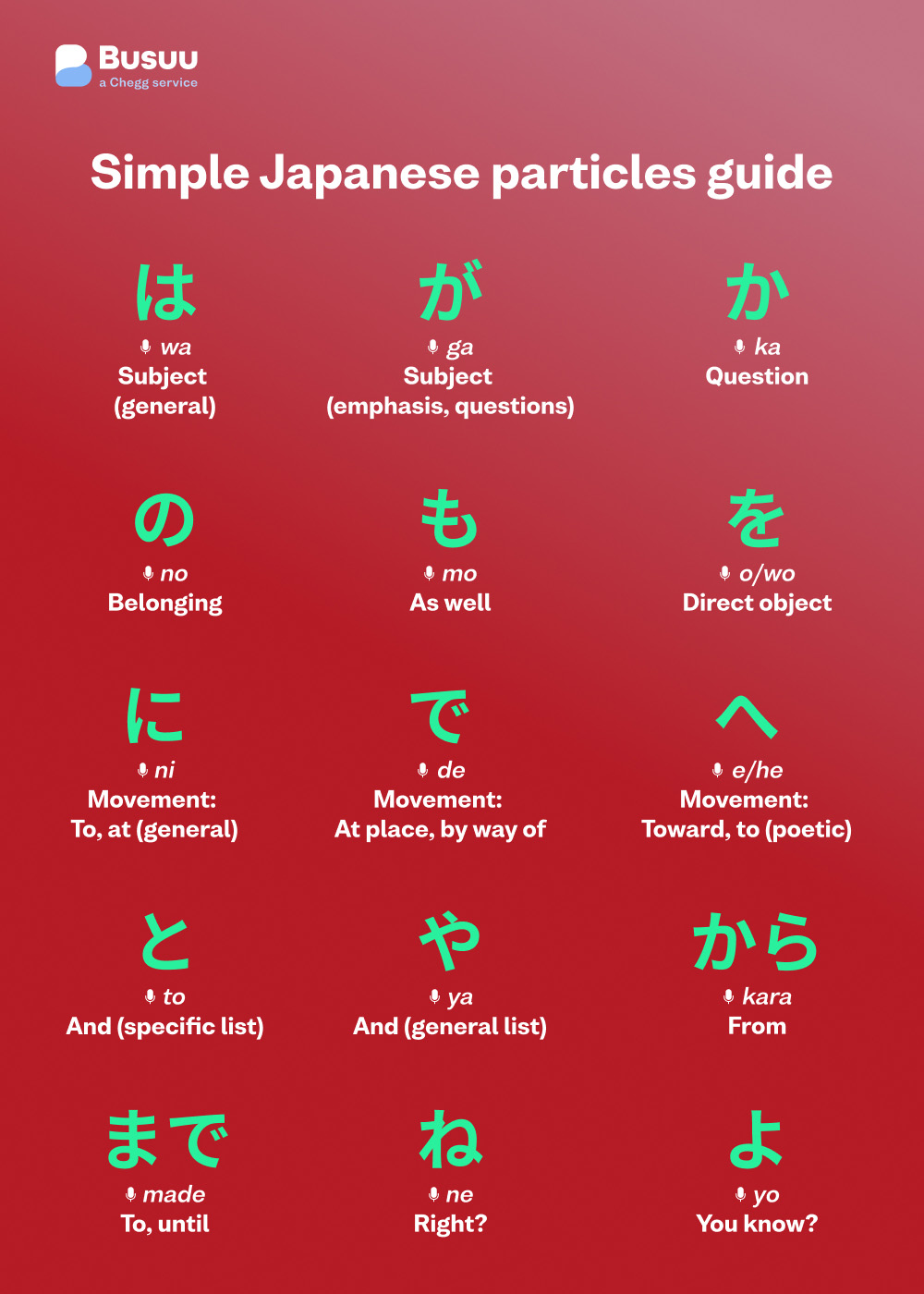 Japanese particles are function words used to give context to other words. They make a sentence clearer, but they don’t change like verbs or nouns (which can be conjugated or become plural).

English, by and large, uses word order rather than particles to provide context. For example, putting the subject first – think, “Birds eat fish”. Word order tells you what you need to know in that sentence. But we do have some particles.

In Japanese, however, particles are very important. They play a big part in telling you what someone’s talking about, and can function like conjunctions and prepositions – like “in”, “and”, “with”’ or “to”.

In fact, the right particles can make the difference between telling someone you’d love some sushi and recounting a distressing experience:

In this case, swapping は (wa) and を (o) creates a big change in meaning.

Fortunately, we’re here to teach you the difference between the basic Japanese particles you need to know.

We’re Busuu, by the way

If all this grammar is giving you a headache, why not skip straight to learning basic Japanese the smart way?

Learn how to read, write, and speak in Japanese with Busuu’s online language course – all it takes is 10 minutes a day.

How many Japanese particles are there?

There are a total of 188 Japanese particles in all! Daunting, maybe, but not something you have to tackle all at once – you’re just getting started, after all.

We’ve put together a list covering some of the most useful and common Japanese particles. While it’s a good start, we’ll be frank – it doesn’t begin to cover all Japanese particles (for that, you’ll have to go through our whole online Japanese course).

So, without further ado, here are your fifteen must-learn Japanese particles explained!

Here’s our handy chart to make it easy to remember the common Japanese particles. If any or all of these are new to you, scroll down – we’ve explained each of them in detail below.

First, we have wa as a particle in Japanese. は (wa) is used to indicate the subject or actor in a sentence. Here, it tells us that the sentence is about Naomi.

For those who’ve learned hiragana already, it’s worth noting that while は is the symbol for ‘ha’, when used as a particle (as in the example above), it’s always pronounced ‘wa’.

Next, let’s look at ga in Japanese. が (ga) works similarly to は (wa), but is used for comparisons or to refer to a question word (like who, what, where, etc.). In this case, it’s emphasising that Naomi is American – this could be in response to the question, “Which one of you is American?” Or correcting your friend who said that Dan was American. Which he isn’t. Naomi is.

As for question words, what that means is, if your first word was だれ (dare), ‘who’, you would use が (ga) instead of は (wa) to indicate that you’re referring back to ‘who’.

Which leads us neatly into our next Japanese particle – ka.

Worth noting: が (ga) can also work like ‘but’, connecting two sentences – but that’s technically called something different: a conjunction particle.

Third up, we have the Japanese particle ka. Like a question mark, adding か (ka) at the end of a sentence makes that sentence into a question. Simple as that!

4. No particle in Japanese

Next, の (no) as a Japanese particle indicates possession. While the word order looks a bit different, it works like ’s (apostrophe s) or of.

も (_mo), the Japanese particle, primarily means also, too, as well as, but it can also be used to emphasize any, as in:

6. O or wo particle in Japanese

As seen in our fish example from earlier (“I eat a fish” vs. “A fish eats me”), を (o) indicates the direct object of a sentence when used as a Japanese particle. We use を (o) only when something is being directly acted upon by the verb.

Next on our Japanese particles list,に (ni) is used to indicate destination, movement, and time, like one word that can mean both to and at. Just think: The knights that say に (ni) are always on the move.

Another location-related particle, で (de) is used to show context, telling us how or where an action is taking place. It means, loosely, at or by way of.

Both basically mean, “I’m going to Tokyo.” But, while に (ni) makes it more of a statement of fact, へ (e) make it more like, “I will travel toward Tokyo.”

へ (e) indicates location and motion, but puts more emphasis on the destination, so it’s more like ‘heading towards’ than simply ‘to’. It’s considered a bit more poetic and nuanced than に (ni), and is also commonly for welcoming someone – it’s the ‘to’ in, “Welcome to my town!”

Worth noting: The particle へ (e) is also often used the way we use ‘dear’ to begin a letter. For example:

10. To particle in Japanese

と (to) means “and” or “with”, and is used specifically to list nouns when you know everything on the list and are saying all the items. So, in the example above, we know that the speaker bought just those two things – a dress and a karaoke machine. Which is all you need, really.

11. Ya particle in Japanese

Like と (to), や (ya) means “and”, but is used when you don’t know everything on the list or aren’t saying all the items. Sounds like there were other people at the party. Cool!

から (kara) means “from” and can be used both for location and time – so “from 3pm to 6pm” or “from home to school”. から can also mean since or after when used to discuss time. It’s sometimes paired with particle 13 – まで (made) – to say “from X to Y”.

13. Made particle in Japanese

Last but not least, we have ね (ne) and よ (yo), which serve the unique function (among these first basic particles, at least) of adding a little flavour to your speech. ね (ne) is added at the end of a sentence and essentially means, “Right?” or, “Isn’t it?” ね (ne) asks the listener whether they agree with what you’re saying, ね.

Learning to use ね (ne) and よ (yo) can help you sound a little more natural when you speak Japanese.

15. Yo particle in Japanese

Similar to ね (ne), よ (yo) goes at the end of a sentence to add a little extra zing to what you’re saying. よ (yo) means something like, “you know?” and can add emphasis or conviction to a sentence, or suggest that you’re sharing new information.

Look at that. You’ve learned the 15 most common Japanese particles – go you!

Sure, Japanese particles go far beyond these, but this is a great starting point for learners.

With these words, you can start to decode sentences and make yourself understood. Now all you need to do is remember them… But fear not! We’ve made memorising these particles easy-peasy. Just refer back to the Japanese particles chart at the top of the list any time you’re feeling rusty.

Ready to go from watashi whaa? to 日本語を話しますか？

Learning a language takes time and effort, but you can learn Japanese – and we can help. Get started for free on Busuu today.

Greetings in Japanese
Learn about Japanese Kanji
17 Ways to Say Thank You in Japanese
Learning Hiragana: why the best way is with mnemonics
Should you learn romaji? What it is and why you don't need it
Time in Japanese
Japanese pronunciation
Japanese alphabet