Did you know that you can already, basically, read romaji? It’s true. As a person who uses the Roman alphabet (to be clear, that’s the letters you’re reading this blog in, you know, a, b, c… you get the idea), you’ve already learned a lot of the basics of reading romaji.

See, ‘romaji’ (a.k.a. rōmaji, or ローマ字) is the name for the Roman alphabetisation of the Japanese language.

When you see dōmo arigatō instead of どうもありがとう, you’re looking at romaji. Dōmo arigatō is the romaji for that Japanese phrase, whereas どうもありがとう is hiragana, one of the Japanese alphabets. Simple enough, right?

Here are a few more familiar words written first in romaji, then in Japanese: 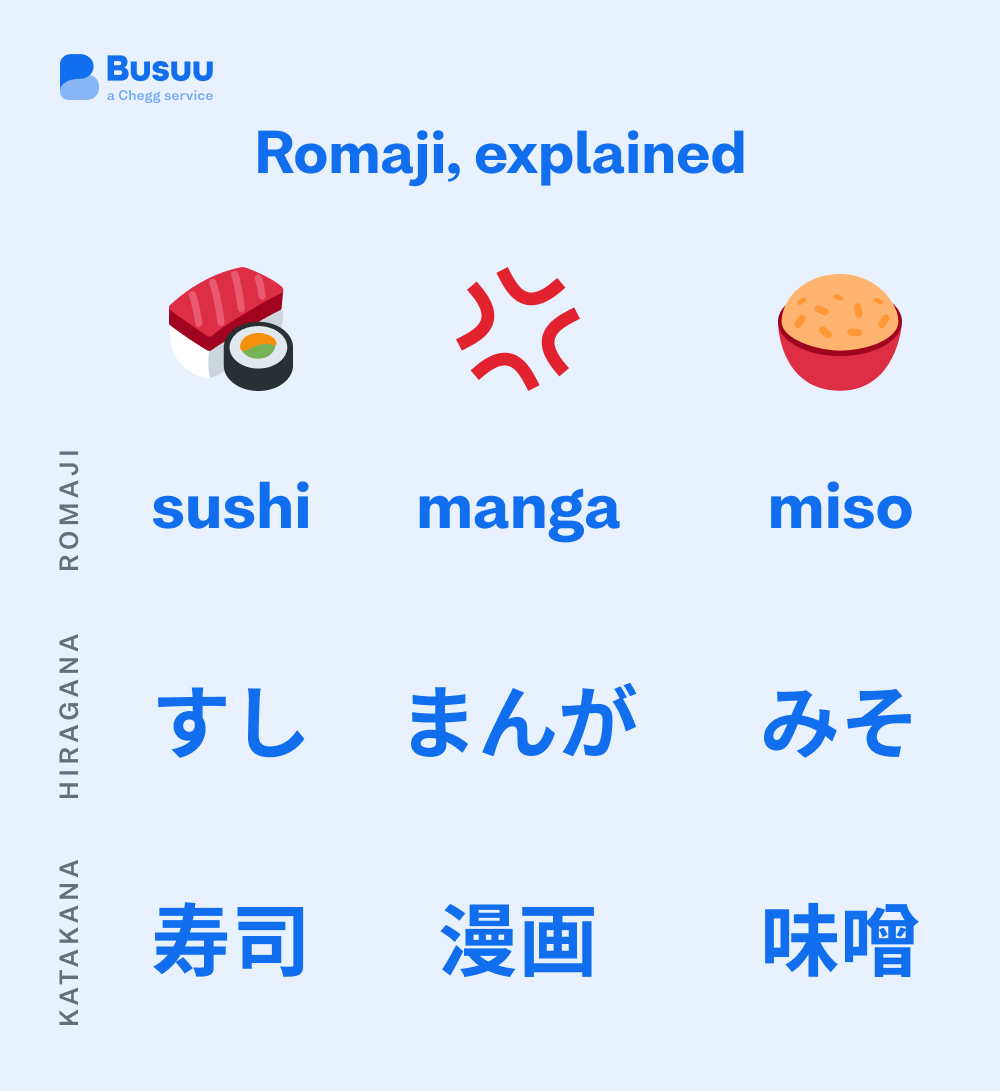 There are several different romaji systems, different ways of translating the same Japanese characters into Roman writing, but that’s basically the deal with romaji. Easy, right? (Well, sort of.)

Now that you know what romaji is, you might be wondering what to do with it. Thing is, romaji has its uses – and pitfalls.

Should you learn romaji? Here’s what you need to know

1. It can be helpful for beginners

Romaji shows up on Japanese road signs and other signage, which can be a lifesaver for panicking tourists with limited knowledge of written Japanese. If you’re a beginner, it can sometimes be nice to have the crutch of romaji to lean on. Plus, you’ll use it to start learning the basics of hiragana and katakana, two of the three Japanese writing systems.

Romaji keyboards are used for typing even in Japan by Japanese people (after all, the Roman alphabet only has 26 letters, whereas katakana and hiragana each have 46 characters!), so it’s handy to know the standard romaji for different Japanese characters and sounds if you’ll be writing or texting in Japanese at all. Which you probably should be.

3. There’s many different systems of romaji

Romaji isn’t its own set alphabet. It’s the translation of Japanese writing into Roman characters for various purposes, and different systems have been created over the years to do that. The most useful and common romaji systems are Hepburn (after its creator, James Curtis, not for Audrey or Katharine), the first and most widely used system; Kunrei-shiki, the system used by the Japanese government; and Nihon-shiki, a more regular system designed to be easier for Japanese people to use.

4. You don’t really need it

If you were planning to take a government exam, you might want to take time to learn the subtle difference between romaji systems. But if you’re just starting to learn Japanese, there’s no point in knowing your Hepburn from your Kunrei-shiki. You’d be much better off stepping away from romaji as soon as you can and learning to read Japanese.

“If that’s the case, shouldn’t I just start learning hiragana and katakana now?”

Probably. And you can get started right now on Busuu.

The trouble with romaji

When you first start to learn Japanese, it can feel a bit overwhelming. You might be tempted to start by learning Japanese in romaji and then figure out the writing and reading later. But that would be a mistake.

See, the thing is that learning romaji isn’t the same as learning Japanese – it’s only a temporary solution. With romaji alone, you might be able to learn some basic phrases, but unless you learn hiragana and katakana, you’ll never learn to read in Japanese, and you’ll struggle to pronounce things correctly.

For example, English speakers frequently misread ‘r’ in romaji as an English ‘r’, but they’re not really the same sound. The Japanese sounds written as ‘r’ – らりるれろ (ra ri ru re ro) – are as similar to an 'l' or 'd' sound as they are an English ‘r’. To make this sound, the tip of the tongue touches the hard palate (the front part of the mouth behind the teeth). It’s a sound that doesn’t quite exist in English.

In fact, many Japanese vocal sounds don’t have a perfect, direct translation to Western sounds. This has led to several different ways of romanising those sounds.

And, once you learn the Japanese writing systems, you get a lot more information out of ローマじ than the word romaji. The ー in ローマ (rōma) tells you that the ‘o’ gets a longer sound, and the fact that it’s written in katakana while じ is in hiragana (字 is the kanji) tells you that ローマ/rōma is a loan word from another language while じ/ji is a native Japanese word.

Or words like Tokyo and sayonara that you hear in English. Once you can read hiragana, you’ll know that we don’t usually pronounce them correctly in English:

Sure, you can learn the romaji systems to learn that ō or ou means a longer ‘o’ sound, but learning to read the words in hiragana is much simpler and more direct. And there’s so much more you miss out on – like that smaller ょ(yo) in Tokyo.

As you can see, it’s really best to learn to translate romaji to hiragana and vice versa – and then eventually let go of romaji altogether once you can read hiragana and katakana.

Even if it seems a little scary at first, learning the basics of reading and writing in Japanese is quite doable!

Plus, you’ll learn the basics of romaji naturally just by seeing how hiragana and katakana translate to Roman letters in passing.

And then you can pretty much forget about it.

Ready to start forgetting about romaji?

You can start learning Japanese on Busuu for free today.