Looking to learn Japanese katakana? You’ve come to the right place. We’ll show you all the characters in the katakana alphabet and the best way to memorize them.

Let’s start with the basics. Katakana is one of three Japanese alphabets – hiragana, katakana, and kanji.

Hiragana and katakana are both what’s called syllabaries, meaning they’re like an alphabet, but instead of each character representing a letter, they each represent a syllable. For example, in hiragana, か is ‘ka’. There are also characters for ‘ki’, ‘ku’, ‘ke’, and ‘ko’ (and many more, of course!).

Both hiragana and katakana contain 46 characters, representing the same set of sounds – although one of the characters in katakana is not in use. That means, to master katakana, you need to learn 45 characters.

It’s easy enough to do, and we’ll show you how.

Should I learn kanji or katakana first?

When you learn Japanese, you typically start by learning hiragana, then katakana, then tackle kanji last. Kanji has thousands of characters, and knowing hiragana makes it much easier to start learning it. And katakana, as you’ll quickly discover, goes hand-in-hand with hiragana. So that’s why we usually recommend learning in that order!

Typically, learning hiragana and katakana takes just a week or two. (You can even do it in just a few days if you’re willing to put in some hard work!). New learners often wonder if Japanese is difficult to learn, and while there are certainly some challenges and complexities, basic Japanese is easier to master than you might think!

For example, you’ll see katakana used to write English loan words that are used in Japanese, like ice cream and sausage. Here’s what that looks like:

Like English, Japanese has a ton of loan words brought in from other languages. If you see katakana in use, you’ll know you’re looking at a word with a foreign origin or a non-Japanese name. Neat, right?

With that out of the way, let’s get down to katakana business.

Katakana, as mentioned above, has 46 basic characters. Each one represents a sound or syllable used in the Japanese language. Like hiragana, katakana also uses transformations – called dakuten, handakuten, and combinations – that tweak those basic characters in order to cover a wider range of sounds.

Since katakana is used for words from other languages, it also includes combinations and transformations you don’t see in hiragana to create sounds that aren’t typically used in Japanese. But we’re getting ahead of ourselves!

Now that you’ve seen all the katakana characters, you need to start working on remembering them.

At Busuu, our Japanese course content was designed by language learning experts to make it easier for you to reach your goals – which, of course, includes making it easier to memorize katakana.

We use something called mnemonics. A mnemonic device, if you don’t know, is anything you can use – like a rhyme, image, or other association – to help you remember something. For example, using your knuckles to recall which months have 31 days, or remembering that dessert has a second s (while desert only has one) by thinking about strawberry shortcake. Both of those are kinds of mnemonics.

We use primarily word and image associations to learn hiragana and katakana.

For example, it might help you to remember that the character for ‘ha’ looks like a hat! Take a peek: 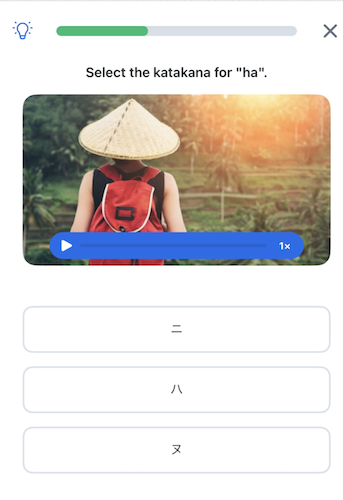 Or here are a few other fun examples from our katakana lessons:

Try it for yourself

Get started for free

Dakuten is a little symbol that looks like a quotation mark. When it’s added, it makes unvoiced consonants voiced. That means instead of a voiceless sound like ‘t’ or ‘s’, you get a voiced sound like ‘d’ or ‘z’.

(New to this kind of thing? Try making just a ‘t’ sound – like you’re starting to say a word but not continuing – then make a ‘d’ sound. Notice how your mouth and tongue move. The sounds are the same, except one you’re using your voice and one you’re not!).

Confused? Don’t fret! In general, Japanese pronunciation can be a bit tricky for English speakers, but it’s easy enough to master with the right information and a little practice. You can help from native Japanese speakers when you learn Japanese with Busuu.

Here are all the katakana characters that can have dakuten added and the new sounds they make.

And there’s one special mention! While ‘v’ is usually translated into Japanese as a ‘b’ noise, in katakana, you can also make a true ‘v’ by adding dakuten to a ‘u’, like this: ヴ.

Handakuten is just like dakuten, but it only applies to the h row of sounds, turning them into a p sound. The handakuten symbol is a little circle, like a degree symbol.

Like in hiragana, we can also combine characters to create new noises, like the ‘gyo’ for gyoza or the ‘chu’ for Pikachu.

However, while in hiragana you only combine the ‘i’ column and small y-characters – for example, gi (ギ) + yo (ヨ) = gyo (ギョ) – in katakana, you can use small versions of any of the vowels and combine them with different consonants as needed.

Here are a few examples:

You may also have noticed the choonpu (ー), or long sound symbol. It appears up above in both fuschia and fork. It looks like a long dash and indicates a syllable where the sound is extended when pronounced out loud. It’s only used in katakana, as hiragana uses double vowels instead to show a longer syllable. It’s written horizontally, like this: ー, when the text is horizontal, but changes to a vertical line when used in vertical text.

And let’s not forget the sokuon, or small tsu (ッ), which is the way a hard stop is shown in katakana, just like the small tsu (っ) is used in hiragana. In romaji, we see this as a repeated consonant, like pp or kk. It’s used to tell you to take a little hard pause in the middle of the word, like in gakkou (がっこう), meaning school, or the name Alex, typically translated into Japanese as Arekkusu (アレックス).

When it comes to katakana, practice makes perfect

Whew! That’s a lot, right? But the good news is, you’re well on your way to mastering katakana. To learn more and get some practice, check out our complete katakana course on Busuu!