If you’re learning Spanish, you’ll want to take time to learn the Spanish alphabet. After all, letters are the building blocks of a language. Besides, it’s easy enough to learn, especially if you can already read Roman letters – you know, a, b, c... all the hits.

Knowing the Spanish alphabet will help with your Spanish pronunciation and give you the foundation you need to learn Spanish spelling and words without relying on English.

So let’s dive in.

Here’s everything you need to know about the Spanish alphabet

How many letters are there in the Spanish alphabet?

The only difference between the English and Spanish written alphabets is that Spanish has 27 letters, while English has only 26. The great news about the Spanish alphabet is that, from a reading perspective, it’s essentially the Latin alphabet we know and love. That’s the alphabet used in English, amongst many other languages – from the Germanic and Romance language families, and beyond.

See, there have been, historically, a few extra letters in Spanish – one of which still exists, and you’ve probably seen it before.

Despite looking distinctly like an n, ñ is its own unique letter. It’s pronounced, approximately, like the “ny” in lanyard or the “ni” in onion.

The history of ñ and the tilde

Ñ, which did not exist in Latin and is therefore not seen in other Romance languages, was originally created around the twelfth century by Spanish scribes. They used the tilde (that’s this symbol: ~) as short form for two of the same letter appearing in a row when they were copying Latin text. So, for example, the original Latin for year, annus, eventually became the Spanish año.

Over time, the tilde symbol fell out of use over other letters, but it remained on the n, taking on new meaning. It became used to indicate that specific “nyuh” pronunciation, becoming part of the unique fabric of the language.

There are a few Spanish accents that we don’t use in English. However, the other diacritics (that’s the symbols added to letters) don’t make the vowels they’re added to into new letters.

The ´ that appears over vowels (á, é, í, ó, ú) is considered one accent that can be applied as needed to indicate which syllable in a word is stressed. And ü does indicate pronunciation (it tells you that the u makes a “w” sound), but simply isn’t considered its own letter.

Other retired letters in the Spanish alphabet

The other unique letters previously in use were:

And you may still see them listed as letters, especially in older textbooks and resources.

See, today, the Spanish alphabet has 27 letters, but it was considered to have 29 up until 2010. That was when the RAE (Real Academia Española) – the institution in charge of the Spanish language – made the decision to officially eliminate che and doble ele as individual letters.

Instead, they’re considered to be something called digraphs – a combination of two letters that represent one sound, like ph and th in English. In making the switch, ch and ll join rr – “doble erre” – another digraph you may sometimes see listed as its own letter!

The intention was to simplify Spanish spelling and grammar, and the change came along with new rules for hyphens and accents. Fun stuff, right?

Feeling all alphabet-ed out already? Skip the semantics and start learning to speak Spanish on Busuu now.

Ok, now you know all about the Spanish alphabet, at least from a writing point of view. But you’re missing an important element – you need to learn Spanish alphabet pronunciation!

But don’t worry, we’ve made it easy. Here’s a table and chart to help you learn the Spanish names for the letters, and see how they’re typically pronounced.

How to say the Spanish alphabet 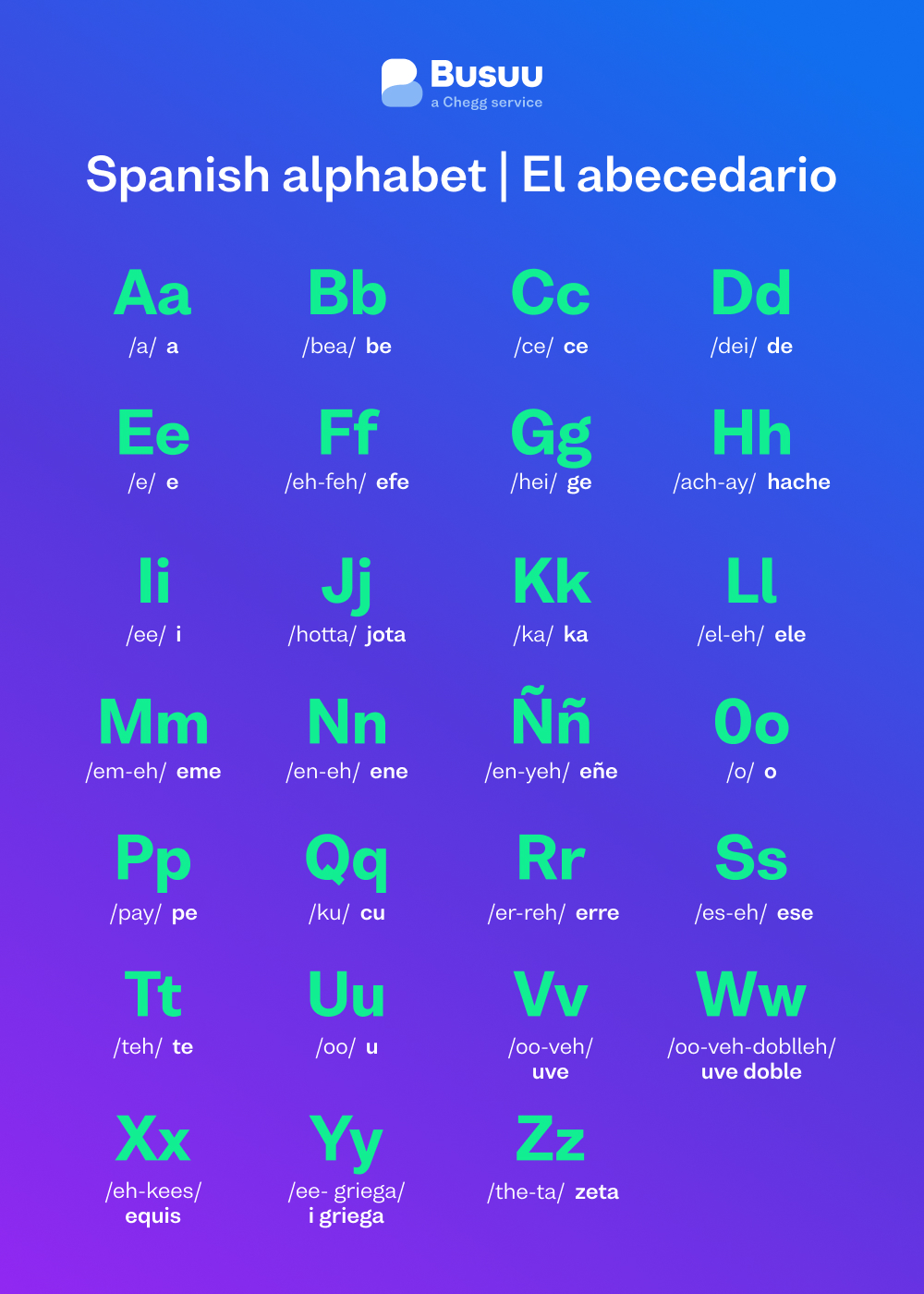 Sneaky exceptions to the rules

While the table above will get you started with the basic sounds of Spanish, as with any language, there are exceptions. Just imagine a non-English speaker trying to pronounce “rhythm” or “philanthropy” with a simple English alphabet chart for guidance.

So let’s take a look at when the chart doesn’t quite line up with how the language is used.

While the pronunciation of most letters will stay consistent, sometimes putting two letters together creates something unexpected. Here are the most common instances of this phenomenon in Spanish – three of which may be familiar if you read the first section on Spanish alphabet letters.

In Spanish, g varies its sound depending on the vowel that follows it.

Ch, formerly the letter che, takes on the English “ch” sound you hear in “choo-choo’ or “cheese”. In Spanish, think chicharron or chica.

Meanwhile, doble ele is pronounced a little differently depending on where you are in the world. It is most commonly pronounced as a ‘y’ throughout the Spanish-speaking world, as opposed to the ‘l’ in loco or lugar. However, in regions of México, Central and South America, it can take on a soft ‘j’ or even a ‘sh’ sound. The ‘j’ is most common in Mexico and Colombia, and the ‘sh’ is most common in Argentina and Uruguay. In some places (including the Philippines), it can even sound like an ‘ly’ – as in millions or the Italian famiglia – but that’s probably the least common variation.

Next up, there’s everyone’s favourite original digraph, doble erre, which is ‘trilled’ – meaning rolled – for a distinctively Spanish sound. This is worth getting the hang of, since the trilled r can change the meaning of a word.

Worth noting, as well, that a single r at the beginning of a word gets the same rolled treatment.

Here are a few examples you can use to practise:

And who could resist a word that uses both sounds? Carretera (highway).

Last but not least, you have equis, which takes on a variety of sounds, depending on context. It can make a “ks” sound, like the x in box, or become a “sh”, “h”, or “s” sound – especially in words and names native to Mexico. When it comes to the correct pronunciation of a word with an x in Spanish, though, it often depends on the origin of the word and the speaker, so it’s best to simply learn as you go. Take a look:

And that’s the Spanish alphabet, covered

Now you know the ins and outs of the Spanish alphabet. You’re practically a master of letters and sounds. But, of course, that’s only the beginning.

Put these letters into action with Busuu’s Spanish course

Busuu can take you from Spanish basics through to resume-worthy fluency. The course even includes a whole set of lessons on Spanish pronunciation. So what are you waiting for?