Learning the months of the year in Spanish is one of the first steps learners take on their language journey. Knowing how to say the Spanish months of the year, means you can engage in lots of daily conversations, with easy sentences you can use to get to know people.

Let’s start with some of the most common everyday questions:

“When is your birthday?” ¿En qué mes cumples años?

What is your favorite month of the year? - ¿Cuál es tu mes favorito del año?

How do you say December in Spanish? - ¿Cómo dices December en español?

In this guide, you’ll learn each month of the year in Spanish, how to pronounce them, some tips on grammar and more ways you can use them in daily conversation.

What are the months of the year in Spanish?

Here are the 12 months of the year in Spanish, and their English translations.

Spanish months of the year 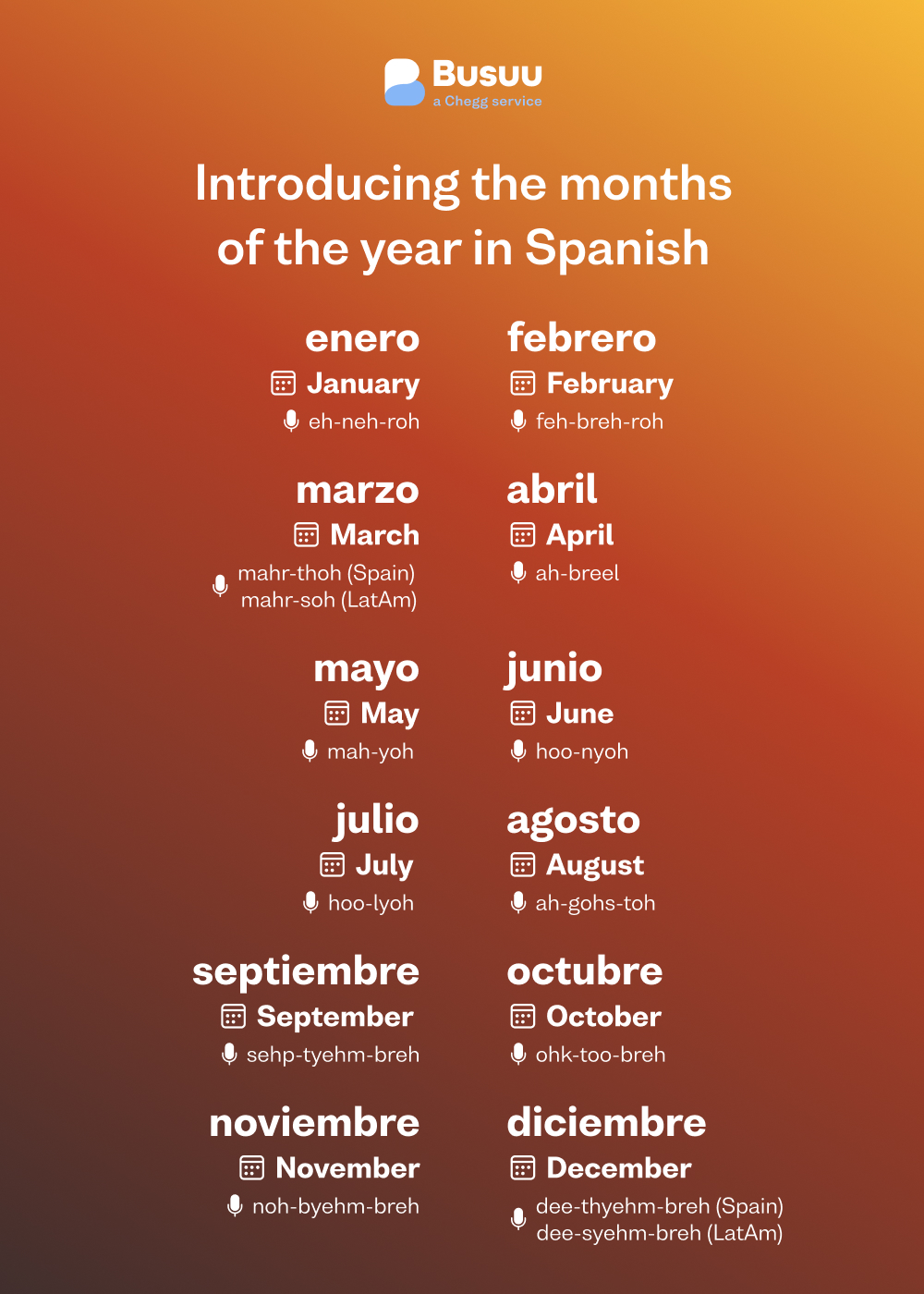 Curious for more? Why not try our interactive online Spanish lessons on the Busuu app.

See if you can remember the months as you work through our beginner Spanish course and get help with your pronunciation by sharing exercises with our community of Spanish speakers.

When you’re writing the month of the year in Spanish, there are some important grammar rules to keep in mind.

Unlike in English, the months of the year are not capitalized in Spanish, unless they are used at the beginning of a sentence or as a title.

However, it is not usually necessary to use the article “el” with the month name, except when specific dates are given, and then the “el” comes before the number rather than the month For example, “el 13 de octubre”

Here are some sentences which talk about activities that take place at a particular time:

The soccer match is in August. - El partido de fútbol es en agosto. Her birthday is in September. - Su cumpleaños es en septiembre. I traveled to Paris in May. - Viajé a París en mayo. I will visit my uncle in December. - Visitaré a mi tío en diciembre.

Look at this Spanish sentence: Viajé a París en mayo. There’s no subject because it’s common for Spanish speakers to omit the subject when it’s easy to guess who performs the action. This usually happens with the pronoun ‘I’.

Spanish months of the year - some facts

The Spanish months have very similar spellings to their English counterparts. This is because they share a common source, Latin, the official language of the Roman Empire, which ruled both Spain and England in ancient times.

Understanding the Latin roots of each month can help you remember their names, so let's take a closer look.

January - enero - comes from the Latin word Ianvarivs (Januarius) and is named for the Roman god of beginnings and endings - Janus. Janus had two faces to see the past and the future, and is also the guardian of doors and gates.

February - febrero - comes from the Latin word Februare, and the Roman festival of purification Februo which took place at this time of year."This Roman festival was dedicated to Pluto, and was where Romans sought to achieve purification. Detox, Roman style.

March - marzo - comes from the Latin word Martivs (Martius) and is the month dedicated to Mars, the god of war, who as we all know, also has a planet named in his honour. In Roman times, March was the first month of their year.

April - abril - comes from “aperio,'' which means ‘to open’ and in turn comes from the Latin word Aprilis. April is the time of year when the plants begin to open and blossom in Italy and the northern Roman Empire so is perfect for the season. Some researchers think that the name could also be a variation of the name of the Greek god of love, Aphrodite.

May - mayo - is believed to come from Maia, the Roman earth goddess which is Maivs (Maius) in Latin. The Romans offered sacrifices to Maia, madre, on May 1st as part of their festival of fertility, Floralia.

June - junio - is named in honour of Juno, the Roman goddess of love marriage and was believed to keep special watch over the lives of women. Juno comes from the Latin Ivnonivs (Iunonius), and she was the wife of Jupiter, king of the Roman Gods.

July - julio - was first known as Qvintilis (Quintilis) in Latin, because this was the fifth month of the Roman calendar. Later, the month was renamed in honour of Roman statesman and Emperor Julius Caesar, as this was the month he was born.

August - agosto - as also originally had a numerical meaning, Sextilis the sixth month. This was later renamed Augustus after the Emperor Augustus Caesar, who was the first Emperor of Rome.

Julius and Augustus were not quickly accepted as the new names among the population, and Quintilis and Sextilis continued to be used 100 of years later, well into the Middle Ages - news didn’t travel quite as quickly in the ancient world.

September - septiembre - comes from the Latin septembris and septem, which means seven.

October - octubre - comes from the Latin Octobri which comes from octo, and means eight in Latin.

November - noviembre - derives from the Novembris and noven, which is nine in Latin, as back then this was the ninth month.

December - diciembre - no points for guessing that the final month of our year is also numeric. In Latin, Decembris came from decem, or ten in Latin for the tenth month, of the Roman year.

Don’t put it off ‘til _enero_, start your Spanish journey with Busuu today.