Learning Spanish? Well, you’re smart to make sure you know your Spanish numbers.

After all, numbers are essential for getting around in the world – whether you need to tell a waiter to bring three glasses for your bottle of wine or simply want to know how much a jumper costs.

In this article, we’ll teach you the Spanish numbers to 100.

Before we begin, it’s important to note that these numbers will sound a little different in Spain than they do in Latin America. However, it’s easy enough to understand both if you know the differences between Spanish in Spain and the Americas.

The biggest pronunciation change you need to know when it comes to counting in Spanish is that, in Spanish speaking countries in the Americas, the letter ‘c’ is pronounced as an ‘s’ sound in when it comes before an ‘e’ or an ‘i’. For those same words, it’s pronounced instead as a ‘th’ sound (like ‘thanks’ or ‘thermometer’) in Spain. 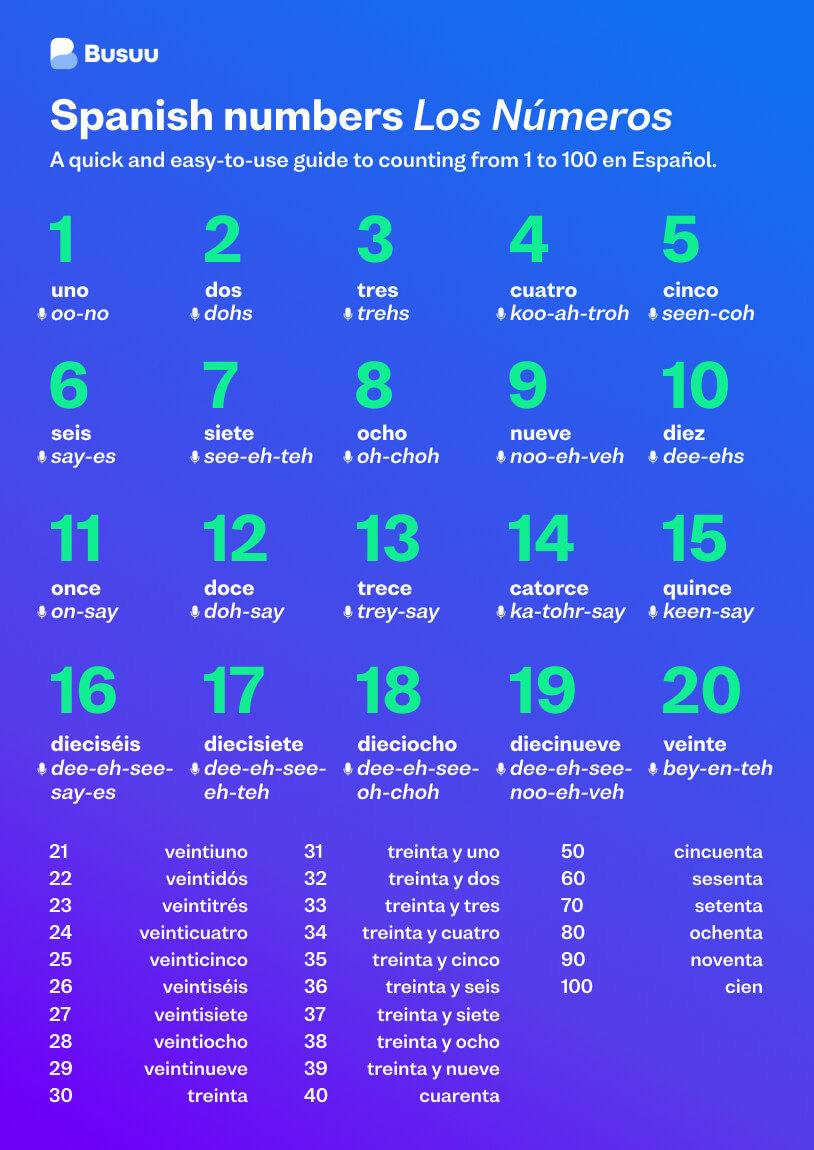 One of the fundamentals of learning any language is learning to count. That’s why we’ve compiled a handy chart for Spanish numbers translation that includes every number from 1 to 100.

If you’re learning Spanish, one of the best ways to learn is to set small, achievable, and specific goals – so let’s start with the Spanish numbers 1 to 10.

You’ll notice that, like with English numbers, many of share some sounds or syllables with the numbers one to 10, but don’t quite follow a regular pattern just yet.

Tired of reading and ready to jump in? Unlike English, the Spanish numbers from 21-29 follow their own unique format – but after that, it’s smooth sailing to 100!

Once you hit 30, as with many languages, you simply need to know the names for 30, 40, 50, and so on. You combine them with the word for ‘and’ (‘y’, en Español) and the numbers one through nine – which you’ve already learned, rockstar!

Let’s see that pattern in action...

Keep scrolling to find out.

And in the meantime, if you’re in a rush and just need to know how to say ‘68’ in Spanish as quickly as possible, our handy chart has you covered.

Now you know how to count in Spanish

And there you have it. That’s how to count in Spanish, 1 to 100. Feel smarter? You should!

Now you can practise counting in Spanish by counting up your everyday life. Two cats, 7 days of the week, 10 fingers, 27 letters in the Spanish alphabet, 18 buttons on the television remote…

Sign up for Busuu and start learning for free today.